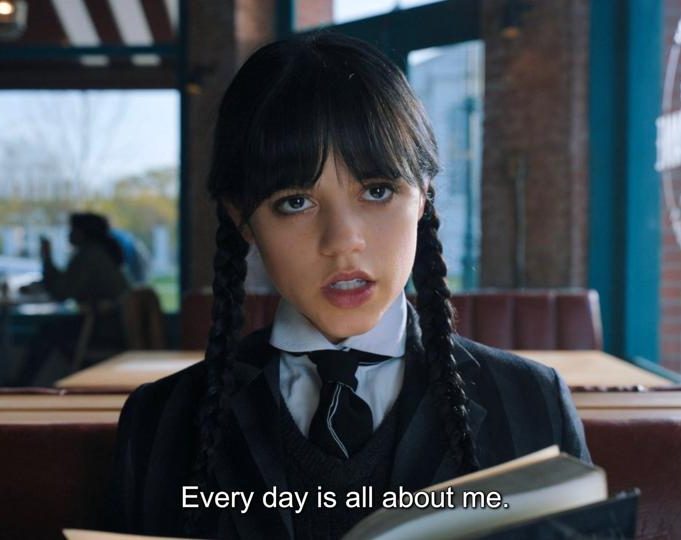 The Netflix series featuring Wednesday Addams showcases her in top form, taking viewers on a thrilling journey as she reveals a new side to this iconic character. As Wednesday delves into her supernatural abilities and uncovers dark family secrets, the show offers a mix of murder, mystery, and chaos. But the real highlight is Wednesday’s sharp wit and biting remarks, as she delivers cutting one-liners and comebacks to everyone she encounters. In honor of her masterful verbal jabs, let’s highlight some of Wednesday Addams’ most memorable quotes from the series.

“Terrible. Everyone would know I failed to get the job done.”

Wednesday is in the car with her parents when Morticia brings up her recent… display of revenge. After her mother asks her how attempted murder would look on her record, Wednesday hits back with this great response. And that’s when we really know we are in for a wild ride.

“I break out in hives and then the flesh peels off my bones.”

Wednesday Addams arrives at Nevermore Academy and starts off her barrage of one-liners and quotable replies at her new “home” in style. Enid asks her what happens if her “color allergy” is triggered. Although allergic to color, this Wednesday Addams quote is certainly colorful.

“I’m not interested in participating in tribal adolescent clichés.”

Enid gives Wednesday a social breakdown of the groups at Nevermore. But Wednesday quickly lets her know that she has no plans on fitting in… or staying long. Her commitment to being creepy and kooky—even by outcast standards—is admirable.

“I actually fillet the bodies of my victims then feed them to my menagerie of pets.”

The kids of Nevermore are wary of this child full of woe. And we get it. They think she’s a murderer and she plays right into it with perfection.

“I find social media to be a soul-sucking void of meaningless affirmation.”

I mean, this Wednesday Addams quote and fantastic one-liner isn’t wrong. Online connections can be good but you have to admire a Gen Z kid who realizes that social media mostly stinks.

“So you were guided by latent chivalry, the tool of the patriarchy, to extract my undying gratitude?”

Only Wednesday would respond to someone saving her life in this way. She reminds Xavier that she would have rather saved herself. It also reveals that they met each other before and have a connection through their grandmothers, who went around swindling people in their twenties.

“…I see the world as a place that must be endured, and my personal philosophy is kill or be killed.”

This Wednesday Addams quote feels like she’s in our brain. Please, don’t say our thoughts out loud to your therapist.

Episode 2 – “Woe Is the Loneliest Number”

“I do like stabbing. The social part, not so much.”

Gotta love this clever play on Enid’s request for Wednesday to “take a stab at being social.” Alas, there is no actual stabbing at this point.

“I know I’m stubborn, single-minded, and obsessive. But those are all traits of great writers… And serial killers.”

Every writer feels a bit called out by this one. But it is true. This Wednesday Addams quote sees into us all.

“I act as if I don’t care if people dislike me. Deep down… I secretly enjoy it.”

Oh, Ms. Thornhill. Did you really think that Wednesday Addams would admit to having feelings? Be serious, normie teacher.

The first enemy Wednesday makes is none other than the social siren Bianca. We saw them fight in episode one, but Wednesday Addams cuts her at the knees right before the race with this truly iconic one-liner.

“Let’s assess, shall we? Bag over my head for optimal disorientation, wrists tied tight enough to cut off circulation, and no idea if I’m going to live or die. It’s definitely my kind of party…”

This episode starts off with Wednesday hopeful that she was abducted by someone sinister. But alas, it is just a group of “high school clowns” who want her to join their secret-ish society. What a bummer.

“I could eat Girl Scouts for breakfast. Actually I have an uncle who went to prison for that.”

“Use the words ‘little’ and ‘girl’ to address me again and I can’t guarantee your safety.”

Wednesday has sharp words for everyone, including a very weird and wild man living in the abandoned scraps of a pilgrim meeting house. And sure enough, he is not safe after Thing takes him out.

“I don’t believe in heaven or hell. But I do believe in revenge. I usually serve it warm with a side of pain.”

Ahh we love the smell of a racist’s statue burning in the middle of a town celebration. Wednesday Addams gets this quote in via voiceover before she exacts revenge for outcasts of the past. Love to see it.

“If trouble means standing up to lies, decades of discrimination, centuries of treating outcasts like second-class citizens or worse…”

This is a brief but powerful statement that gets cut off during yet another verbal sparring between our pigtailed protagonist and Principal Weems. She’s all about causing trouble in a great way and I support this endeavor.

“If he breaks your heart, I’ll nail gun his.”

Surely this line will become popular among BFFs around the world. Who doesn’t love an odd friendship pairing like Enid and Wednesday? This Wednesday Addams quote terrifies us, but warms our hearts.

Boom. This line speaks for itself.

“What kind of dystopian hellscape is this?”

This question is the only one to ask when your roommate takes you to the Hawte Kewture. Even if you aren’t dark like Wednesday, that place is like a hyped up version of Claire’s.

“It’s not my fault I can’t interpret your emotional Morse code.”

Oh Wednesday. At this point, Tyler is making it super clear that he’s trying to be more than friends and she cannot understand this at all. Also, this Wednesday Addams quote from the Netflix show applies to so many of us who miss very obvious flirting.

“Listen, people like me and you, we’re different. We’re original thinkers, intrepid outliers in this vast cesspool of adolescence. We don’t need these inane rites of passage to validate who we are.”

One of the best relationships on this show is between Wednesday and Eugene. Of all the people in the world, she becomes his only friend. This is one of the rare sweet things she says during season one.

“They couldn’t even spring for real pig’s blood. It’s only paint.”

If you’re gonna do a Carrie scene at the dance, make sure you commit all the way. I, too, am disappointed that it wasn’t pigs’ blood raining from the sprinklers.

“…you taught me how to be strong and independent. How to navigate myself in a world full of treachery and prejudice. You are the reason I understand how imperative it is that I never lose sight of myself. So as far as fatherhood goes, I’d say you’ve been more than adequate.”

This is such stellar dialogue that underscores the unique relationship Wednesday shares with her father. It is a rare moment of her truly expressing her love and admiration for something besides death and torture.

“My appetite eludes me, Mother. The same way the truth eludes you.”

Well, don’t we just love this ray of sunshine!

“I was reaching into the black maw of death to contact a relative.”

Shame on Enid for interrupting Wednesday’s (failed) séance. Also, what an odd thing to interrupt in the first place.

“I haven’t always been against birthdays. Each one reminds me I’m a year closer to death’s cold embrace.”

Wednesday’s reaction to her surprise birthday party is exactly what it should be. Her reason for loving birthdays lines right up with her dedication to morbidity.

“Every day is all about me.”

Put this Wednesday Addams quote on a T-shirt, Netflix! Honestly, we should all love ourselves this much. (Well, maybe not to the point of endangering and alienating our friends.)

“I figured since you no longer have an old vendetta to obsess over, you’re free to solve some real crime.”

This is the burn that the Sheriff Galpin deserves. Leave Gomez alone and do your job, buddy.

“I don’t bury hatchets. I sharpen them.”

“I don’t need your help or your pity. I already have a mother and a therapist. That’s enough torture, even for me.”

Now this is a burn. Ms. Thornhill caught the wrong side of Wednesday and it ended with pain.

“I enjoy funerals. I’ve been crashing them since I was old enough to read the obituary section.”

Well, now we need a show about a little Wednesday’s adventures of crashing funerals. This Wednesday quote really opens the door for another Netflix spinoff. But she doesn’t enjoy this one at all in the midst of her frustration.

“If you are discovered, I will disown you and collect the reward tied to your capture.”

Oh how we love Uncle Fester… and so does Wednesday. But make no mistake, she will make sure to collect on his misfortune if necessary.

“Because for some reason I cannot fathom or indulge, you seem to like me.”

Wednesday is the “It” girl among a couple of the guys despite having no desire for their attention. This includes Xavier, who continues to want to be her friend for frankly baffling reasons.

“Friends are a liability and can be exploited. That makes them weaknesses.”

This Wednesday Addams quote does have a dash of truth. Then again, a life without the love and fun of friendship wouldn’t be worth living, something that Wednesday is begrudgingly realizing.

“I will ignore you, stomp on your heart, and always put my needs and interests first.”

At least she’s honest. And even with her straightforward answer to Tyler, he still wants to date and kiss her anyway.

“Of course the first boy I kiss would turn out to be a psychotic, serial-killing monster. I guess I have a type.”

Well damn. Just when we thought our morbid sweetie was falling in love with a cool normie, he turns out to be a hyde.

She tells the crew this before she tases Tyler. And, to be frank, she should have done a lot more. But alas, they snitched on her and ruined the moment.

“Anytime I grow nauseous at the sight of a rainbow or hear a pop song that makes my ears bleed, I’ll think of you.”

Awww Wednesday. This is her way of saying she loves Enid before she thinks she is heading home.

“You can’t wake the dead. Believe me, I’ve tried.”

Well, well, well. What a twist. Ms. Thornhill is actually Laurel and the one controlling Tyler. After she kidnaps Wednesday and reveals her plan to revive Joseph Crackstone, Wednesday gives this hilarious response.

Even in near death, Wednesday Addams is a ball of sarcasm and funny quotes in her Netflix show. She says this to Goody, who appears to give her instructions on how to kill Crackstone (again).